Call It By Its Name: Afriphobia Is Racism Against African People

A group of African political, equality and community activists, and academics within and outside Britain have signed an open letter (copied below) to the Labour Party’s Chakrabarti Inquiry into ‘Anti-Semitism and other forms of racism’.

They are of the view that the Inquiry’s remit is discriminatory in that it highlights one form of racism but does not name anti-African racism, Afriphobia, which is ingrained in society and results in the over-representation of Africans in all indices of social deprivation.

The group has made suggestions for the Inquiry to consider with regards to its focus and language.

One of the co-signatories KB Asante, a former aide of President Kwame Nkrumah and Ghanaian High Commissioner to the United kingdom said: “As a member of the Ghana delegation at the birth of African Liberation Day in Addis Ababa, Ethiopia on May 25, 1963, I support the sentiments expressed in this open letter challenging the structural racism and Afriphobia ingrained in society.”

The open letter, initiated by Africans For JC Values, a Momentum movement organisation, is in response to recent suspensions and censuring of Labour Party members on allegations of anti-Semitism.
Ends

From Awula Serwah
Africans For JC Values Secretary
via africansfor@gmail.com 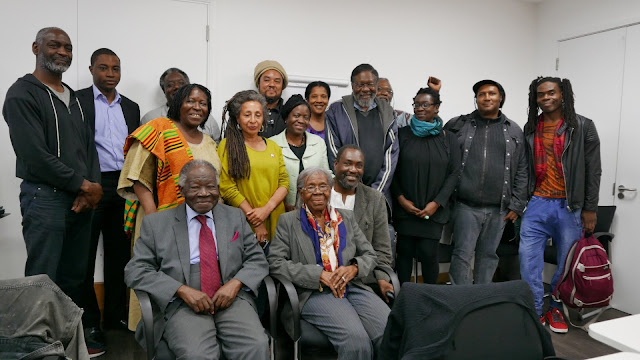 Some of the Open Letter co-signatories with seated L-R KB Asante and Matilda Asante. Photo by Toyin Agbetu

Call It By Its Name: Afriphobia Is Racism Against African People

We the undersigned note that the Labour Party has set up the Chakrabarti Inquiry (Inquiry) to investigate “Anti-Semitism and other forms of racism”.
We are of the view that the terms of reference: ‘Anti-Semitism and other forms of Racism’ are unwittingly discriminatory, as racism against Jewish people is set apart from racism and prejudice against other peoples, particularly Africans (Afriphobia) and Muslims (Islamophobia).

Even though there is only one race, the human race, a more appropriate title could be on the lines of ‘Investigation into Racism, which includes Afriphobia, Anti-Semitism, and Islamophobia’.

We note that over the years there have been allegations of racism towards Africans (Africans from the continent of Africa and Africans from the Diaspora) and Asians within and outside the Labour Party, but no independent public inquiry has been set up to investigate these allegations.

Undoubtedly  the Jewish holocaust (properly known among the Jewish people as Shoah) is a terrible blight on human history, but we must remember that there were holocausts before and after. The Congolese holocaust in the name of King Leopold II, is said to have claimed 10 millions lives.

The holocaust perpetrated on Africans, also properly known by African people by the Kiswahili words Maafa or Maangamizi, led to the deaths of tens of millions of Africans in holding cells on the continent of Africa, in the process of capture and kidnappings, in the Middle Passage, in enslavement and plantation systems in the Americas, Caribbean, and in the German-governed death camps in Namibia.

The survivors of the Middle Passage suffered unimaginable torture and hardships at the hands of enslavers and plantation owners, and their descendants continue to suffer acute deprivation and are the object of discrimination and racism in America and in the UK, where they are under represented at every level of public life, including in the Labour Party, and over-represented in all indices of social deprivation and criminalisation.

It is for this reason that pan-African Reparation organisations continue to work on repairing the damage to Africans and Africa caused by the trafficking of enslaved Africans, colonialism and neo colonialism. This damage is still being experienced by people of African heritage today.

How is it that commentators can freely blame Africans for the atrocities they suffered with little understanding of the context of the Maangamizi or Maafa without any public uproar? In addition, the school curriculum does not currently teach sufficiently about non-European civilisations, the contributions of non-Europeans to world civilisation or the uncomfortable truths about the British Empire. This in itself contributes to the structural racism which is in society in general, including the Labour Party, where ignorance of the history of the peoples of Africa pervades.

Anti-Semitism and Islamophobia are recognised as challenges that need to be addressed, but Afriphobia is so ingrained in our society that it is not acknowledged as an issue that needs to be challenged, or called by its specific name.

People of African heritage can be vilified and even blamed for the genocide they suffered without any public inquiry or calls for a public inquiry. However when comments perceived to be negative are made about Zionism or the state of Israel, this is perceived at times to be anti-Semitic by those who do not like the comments, whether or not these claims are supported by evidence. This often results in suspensions from the Party and other unfair censures.

We reject the idea that opposition to Zionism or the Israeli government is necessarily anti-Semitism.

The United Nations has declared 2015-2024 as the International Decade for People of African Descent, and has recognised that Africans represent a distinct group whose human rights must be promoted and protected.

We therefore call upon the Inquiry to investigate and accord equal importance to Afriphobia and its manifestations within and outside the Labour Party.

We also ask the Inquiry not to unwittingly promote discrimination by the exclusion of the Afriphobia* terminology, and advocate the use of the AAEM (African, Asian, Ethnic Minority) terminology instead of BAME (Black, Asian, Minority Ethnic) which excludes the African identity.

* We  define Afriphobia as: The prejudice or discrimination against; fear, hatred, or bigotry towards people of African heritage and things African. 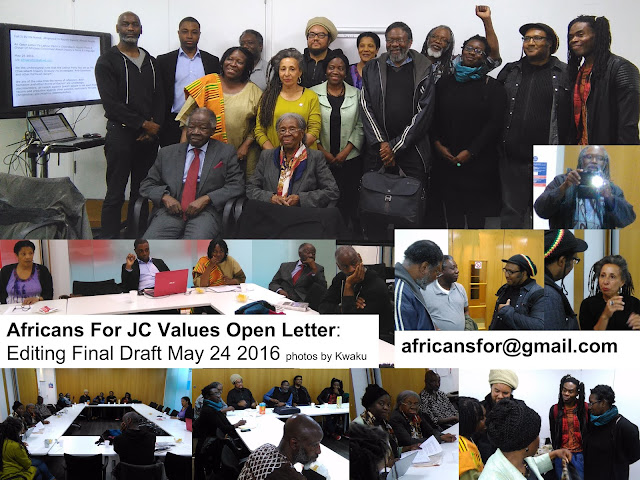 African Liberation Day on May 25 is an annual holiday in various countries in Africa, and the world, coinciding with African Union's Africa Day. Wikipedia. https://en.wikipedia.org/wiki/African_Liberation_Day

Afriphobia is the prejudice or discrimination against; fear, hatred, or bigotry towards people of African heritage and things African. Africans For JC Values. www.bit.ly/AFJCCInq

Anti-Semitism is hostility to or prejudice against Jews. Oxford Dictionaries

Islamophobia is the hatred or fear of Muslims or of their politics or culture. Collins Dictionary
Maafa (or African Holocaust, Holocaust of Enslavement, or Black holocaust as alternatives are terms used to describe the history and ongoing effects of atrocities inflicted on African people. The Maafa includes the Arab and Atlantic slave trades, and continued through imperialism, colonialism, and other forms of oppression to the present day. Wikipedia. https://en.wikipedia.org/wiki/Maafa

Maangamizi is the intergenerational white supremacist racist mind-set which fueled the Transatlantic Traffic in Enslaved Afrikans (TTEA), Maangamizi (Hellacaust of chattel, colonial and neo-colonial enslavement) from the 15th century to the present day. SMWCGE. https://www.change.org/p/stop-the-maangamizi-we-charge-genocide-ecocide

When You Kill Ten Million Africans You Aren’t Called ‘Hitler’. Walking Butterfly. http://www.walkingbutterfly.com/2010/12/22/when-you-kill-ten-million-africans-you-arent-called-hitler/
Posted by The African Or Black Question (TAOBQ) at 23:39