Colours For African Pride And For Marking Atrocities Against Africans?

Following the terrorist attacks on Paris in 2015, who can forget the widespread exposure of the French flag colours of red, white and blue?

Facebook provided a filter for the colours on the profiles of subscribers who wanted to show solidarity with Parisians. The French tri-colour run across mastheads, such as Metro, the free London newspaper, whilst the colours were projected upon some of the city's buildings.

This year, following the massacre at the Orlando gay club, Metro's masthead was adorned with the multi-colours of the LGBT community's flag which was also photoshopped into the front page photo. Google incorporated the colours within its logo. And seeing the rainbow flag flying at half mast at the US embassy in Berne, Switzerland, one can imagine the same happened at other US embassies across the world.

This got me thinking - when do newspapers, corporate behemoths, or embassies show sympathy or solidarity by displaying symbolic colours when atrocities are inflicted against Africans?

Then it occurred to me that it wasn't so simple. What flag or colours are there that universally represent Africans? Not the green, white and yellow of the African Union (AU), as the organisation represents only continental Africa. The ratification of a 2012 proposed 6th region that could make African diasporan countries such as Haiti eligible for state membership seems far off.

There are two competing pan-African colours - red, gold and green, which is inspired by Ethiopia's green, gold and red flag, and the red, black and green of the UNIA (Universal Negro Improvement Association-African Communities League) flag.

Moving forward, I propose a combination of both flags, thus creating a Global African flag consisting of red, black, gold and green, which can represent people of African heritage, be they from the African continent or the African diaspora. 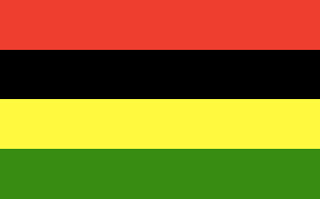 Without taking anything away from the two pan-African tri-colours, there's no reason why this "unifying" quad-colour can not come to symbolise African pride, unity, or solidarity.

If one's in sympathy with using certain colours to symbolise solidarity with Africans, particularly when atrocities are inflicted against them, then it's up to one to be pro-active and not wait for mainstream newspapers, corporate behemoths or embassies. They will only co-opt such a move after some groundswell has been created from the grassroots up.

Finally, whilst AHRD is inspired by a UNIA declaration, it's important to note that there are a number of global African histories connected to the month of August. One of which is the inspiration for a UN/UNESCO initiative which has noble aims, but which is mollified and undermined by what some heritage establishments call Slavery Remembrance (or Memorial) Day, but which conscious Africans call International Day Of African Resistance Against Enslavement - August 23. 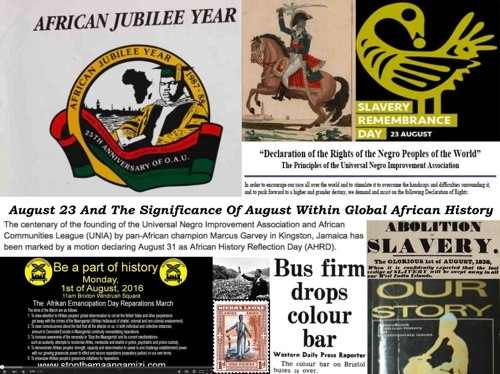 August 23 And The Significance Of August Within Global African History is a free inter-generational event which takes place Tuesday Aug. 23 2016, 6.15-8.15pm at Unite HQ in Holborn, central London. To book: http://bit.ly/Aug232016.


Posted by The African Or Black Question (TAOBQ) at 20:36